Whew!!! This report and photo from Breaking Israel News takes my breath away!  This dear rabbi’s action is prophetic of brother Judah welcoming home the lost tribes of Israel,  the Northern Kingdom, “the House of Israel”, a.k.a. Ephraim, which was taken into captivity around 720 BCE by the mighty war machine of Assyria.

In case you are not familiar with the biblical account, all but the poorest in the Northern Kingdom were exiled, fulfilling the name of Gomer’s and Hosea’s first child, “Jezreel” which means sown or scattered.  “So he went and took Gomer the daughter of Diblaim; which conceived, and bare him a son.  And the LORD said unto him, Call his name Jezreel; for yet a little while, and I will avenge the blood of Jezreel upon the house of Jehu, and will cause to cease the kingdom of the house of Israel. (Hosea 1:3-4)

Note the promise to “cease [shabath] the kingdom.” This word, in Hebrew. is the root of the word usually translated as “Sabbath,” which in Hebrew is Shabbat. It is first used in Genesis 2:2-3 when Abba  “rested” from His labors and sanctified the seventh day. We can say that in response to their idolatry and His repeated warnings to keep His Shabbats and His commandments, Abba gave Ephraim  a very long Shabbat, or time-out, to rest.

The captured and exiled among the ten tribes were treated mercilessly by Assyria, as depicted by the name of Hosea’s 2nd child, “LoRuchamah,” which means “no mercy,” with many being killed and others horrifically tortured. The gory details are easily discoverable via a simple Internet search “Assyrian treatment of slaves.” Those who remained in the land soon found it overrun with those of other nations sent by the king of Assyria. Both groups became, essentially, Gentiles, being no longer identifiable as the people of God who agreed at Mount Sinai to be the Bride and the light of the world:

“Now therefore, if you will indeed obey my voice and keep my covenant, you shall be my treasured possession among all peoples, for all the earth is mine; and you shall be to me a kingdom of priests and a holy nation… All the people answered together and said, “Everything that the LORD has spoken, WE WILL DO! ” (Exo. 19: 5-6a,8, emphasis added see also 24:3)

Ten of the twelve tribes who had accepted the Creator’s proposal at Mount Sinai broke their betrothal vows by bowing to the golden calves in Dan and Bethel and by obeying the instructions of their king. After centuries of being warned and reminded of the consequences of departing from the lifestyle prescribed by their God for a life of blessing, they became “not a people.” This is the Hebrew understanding of what it means to be “lost.”

We can sum it up by saying that the kingdom of twelve tribes that was echad (one) under Saul, David, and Solomon was split into two kingdoms (1 Kings 11). Within a few generations, the Northern Kingdom, the ten tribes,  was dead and buried. Hosea wrote the death certificate. “[Ephraim] offended in Baal, he died” (Hosea 13:1). Thus, only the Southern Kingdom of Judah was left as the identifiable people of Yahweh. Their brothers had disappeared into the sea of Gentiles even as the Egyptians had disappeared into the Red Sea.

While Judah in the south remained true, in general, to the instructions of clean and unclean, Temple worship, keeping the Sabbath and the Feasts of the LORD (prescribed in Lev 23), the Northern Kingdom had been a hotbed of idolatry even from its beginning.  Jeroboam, the first sovereign of Ephraim set the course of history by establishing not only his own priesthood and feasts, but TWO golden calves (1 Kings 12:29). Throughout the remainder of the life of this nation, the legacy of its rulers is, “he departed not from the ways of Jeroboam.” 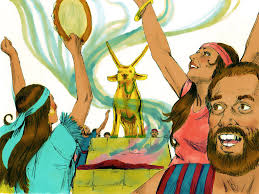 But, Hosea is far from finished!

Other prophets see the same thing!

“ And I will make them one nation in the land upon the mountains of Israel; and one king shall be king to them all: and they shall be no more two nations, neither shall they be divided into two kingdoms any more at all (Eze. 37:22).

“ I will bend Judah as my bow and fill it with Ephraim. I will rouse your sons, O Zion against your sons, O Greece. I will wield you like a warrior’s sword.”  (Zech. 9:13)

How can this be? We have a dead and buried Northern Kingdom. Yet, the prophets declare the two kingdoms will be restored and they will come out of the land!

Folks, this means nothing less than the Northern Kingdom will be resurrected!

But, how can that be?  Stay tuned.