All four gospels quote Isaiah’s message to “prepare the way of the LORD.” The term is ambiguous to most modern readers. It’s first usage concerns Father Abraham, who was willing to leave everything behind and head toward a place of blessing, not knowing where he would end up.  The Hebrew word translated as “way” is derek. While it can mean a literal road or a path, our subject today is assuredly a manner of walking, or, in other words, a lifestyle.

But, in the end, it emerges that in reality there are only two “ways” : life or death, blessing or curse, good and evil. No surprise to those of us who have been quickened to look deeply into the first five books of the Bible. The verses below are sobering. And what is clearly absent is any indication that the standards of these “ways” change as we flip the page from Malachi to Matthew. Though some may call good evil, and evil good, “I, the LORD, change not.” 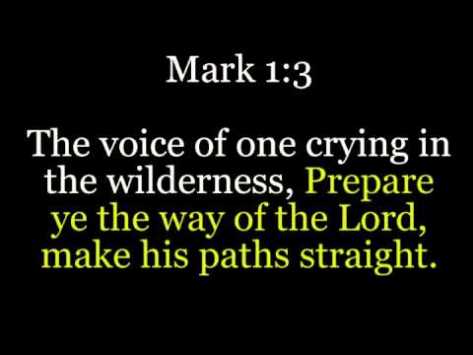 prepare=       פּנה   pânâh: to turn, to turn toward or from or away, to turn and do, to turn and look at or back, to make clear, to make a turn, to show signs of turning, to turn back, to be turned back

As always when studying Scripture, the reader is urged to consider surrounding passages in order to understand context.

Gen. 18:19 For I have chosen him (Abraham), that he may command his children and his household after him to keep (Hebrew: shamar, guard, protect) the way (derek) of the LORD by doing righteousness and justice, so that the LORD may bring to Abraham what he has promised him.”

Did Abraham live up to God’s expectations? We don’t have to travel very far into the book of Genesis to receive the answer.  “…Abraham obeyed my voice and kept my charge, my commandments, my statutes, and my laws.” (Gen. 26:5)  This was a paradigm-shifting verse for me some years ago. If the Law of God was first given at Mount Sinai, how could Abraham, born hundreds of years earlier, keep it? If the Law of God was only intended for the Jewish people, as it is often taught, why was it important to God that Abraham, who would become the father of many nations, keep it? Why not wait and give it to Jacob’s son, Judah, whose descendants became known as “Jews” (at least in English Bibles), after the 10 Tribes of the Northern Kingdom of Israel separated themselves from the commonwealth and were eventually scattered into the nations?

Jdg. 2:22 in order to test Israel by them, whether they will take care to walk in the way of the LORD as their fathers did, or not.”

2Kings 21:22 He abandoned the LORD, the God of his fathers, and did not walk in the way of the LORD.

Prov. 10:29 The way of the LORD is a stronghold to the blameless, but destruction to evildoers.

Isa. 40:3 A voice cries: “In the wilderness prepare the way of the LORD; make straight in the desert a highway for our God.

Jer. 5:4 Then I said, “These are only the poor; they have no sense; for they do not know the way of the LORD, the justice of their God.

Jer. 5:5 I will go to the great and will speak to them, for they know the way of the LORD, the justice of their God.” But they all alike had broken the yoke; they had burst the bonds.

Eze. 33:20 Yet you say, ‘The way of the Lord is not just.’ O house of Israel, I will judge each of you according to his ways.” [Notice it is the House of Israel, the Northern Kingdom, who complains that the way of the LORD is unjust. We do not hear this from the House of Judah–the Jewish people. But, praise God, the day will come, and has now, that the prodigal Ephraim, sown into the nations and resurrected by the blood of Yeshua, is repenting and returning to [preparing] the way of the LORD.]

Mat. 3:3 For this is he who was spoken of by the prophet Isaiah when he said, “The voice of one crying in the wilderness: ‘Prepare the way of the Lord; make his paths straight.'”

Mar. 1:3 the voice of one crying in the wilderness: ‘Prepare the way of the Lord, make his paths straight,'”

Luke 3:4 As it is written in the book of the words of Isaiah the prophet, “The voice of one crying in the wilderness: ‘Prepare the way of the Lord, make his paths straight.

John 1:23 He said, “I am the voice of one crying out in the wilderness, ‘Make straight the way of the Lord,’ as the prophet Isaiah said.”

Acts 18:25 He had been instructed in the way of the Lord. And being fervent in spirit, he spoke and taught accurately the things concerning Jesus, though he knew only the baptism of John. Act_18:26 He began to speak boldly in the synagogue, but when Priscilla and Aquila heard him, they took him aside and explained to him the way of God more accurately.

2 Kings 22:2 And he did what was right in the eyes of the LORD and walked in all the way of David his father, and he did not turn aside to the right or to the left.

Psa. 119:14 In the way of your testimonies I delight as much as in all riches.
Psa. 119:27 Make me understand the way of your precepts, and I will meditate on your wondrous works.

Psa. 119:30 I have chosen the way of faithfulness; I set your rules before me.

Psa. 119:32 I will run in the way of your commandments when you enlarge my heart!

Psa. 146:9 The LORD watches over the sojourners; he upholds the widow and the fatherless, but the way of the wicked he brings to ruin.

Prov. 2:8 guarding the paths of justice and watching over the way of his saints.

Prov. 2:12 delivering you from the way of evil, from men of perverted speech,

Prov. 2:20 So you will walk in the way of the good and keep to the paths of the righteous.

Prov. 4:11 I have taught you the way of wisdom; I have led you in the paths of uprightness.

Prov. 4:14 Do not enter the path of the wicked, and do not walk in the way of the evil.

Prov. 4:19 The way of the wicked is like deep darkness; they do not know over what they stumble.

Prov. 6:23 For the commandment is a lamp and the teaching a light, and the reproofs of discipline are the way of life,

Prov. 8:13 The fear of the LORD is hatred of evil. Pride and arrogance and the way of evil and perverted speech I hate.

Pro. 8:20 I walk in the way of righteousness, in the paths of justice,

Prov. 9:6 Leave your simple ways, and live, and walk in the way of insight.”

Prov. 10:29 The way of the LORD is a stronghold to the blameless, but destruction to evildoers.

Prov. 12:26 One who is righteous is a guide to his neighbor, but the way of the wicked leads them astray.

Prov. 13:15 Good sense wins favor, but the way of the treacherous is their ruin.

Prov. 15:9 The way of the wicked is an abomination to the LORD, but he loves him who pursues righteousness.

Prov. 15:19 The way of a sluggard is like a hedge of thorns, but the path of the upright is a level highway.

Prov. 21:8 The way of the guilty is crooked, but the conduct of the pure is upright.

Prov. 21:16 One who wanders from the way of good sense will rest in the assembly of the dead.

Prov. 22:5 Thorns and snares are in the way of the crooked; whoever guards his soul will keep far from them.

Amos 3:3 “Do two walk together unless they be agreed?

Mat. 11:30″ For my yoke is easy, and my burden is light.” [Something to consider is that a yoke allows two oxen to pull far more weight than a single ox, but, it requires the animals to be strapped together in such a manner that they are continuously in step. To walk with Yeshua means to be yoked with Him. If we are strapped together with Him, it follows that we are in step with Him, keeping His commandments, keeping His Feast days, thus being a “light to the world.” This is what it mean to do the works of Abraham (Gen. 26:5, John 8:39). Abraham was a “light to the world.”]

Mat. 22:16 And they sent their disciples to him, along with the Herodians, saying, “Teacher, we know that you are true and teach the way of God truthfully, and you do not care about anyone’s opinion, for you are not swayed by appearances.

Luke 20:21 So they asked him, “Teacher, we know that you speak and teach rightly, and show no partiality, but truly teach the way of God.

John 14:6 Jesus said to him, “I am the way, and the truth, and the life. No one comes to the Father except through me.

1 John 2:6 whoever says he abides in him [Yeshua] ought to walk in the same way in which he walked.

1 John 1:7 But if we walk in the light, as he is in the light, we have fellowship with one another, and the blood of Jesus his Son cleanses us from all sin.

Acts 9:2 and asked him for letters to the synagogues at Damascus, so that if he found any belonging to the Way, men or women, he might bring them bound to Jerusalem.

Acts 19:9 But when some became stubborn and continued in unbelief, speaking evil of the Way before the congregation, he withdrew from them and took the disciples with him, reasoning daily in the hall of Tyrannus.

Acts 19:23 About that time there arose no little disturbance concerning the Way.

Eph_4:17 Now this I say and testify in the Lord, that you must no longer walk as the Gentiles do, in the futility of their minds.

One thought on “Considering “the way of the LORD””